Add a day, or two of compound exercises, to reap all of the above benefits, and to mix up your routine. Begin with one set of 8-12 reps with light weight, to start. As you learn the moves, increase the weight and the number of sets. Most exercises begin in the athletic stance which is feet hips distance apart, slight bend in the knees, upright posture with core engaged. Use dumbbells or other forms of resistance like cans or even laundry detergent. 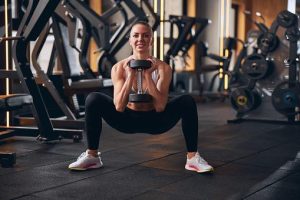 Squat with a shoulder press

Start in the Athletic stance, weights above shoulders, hinge at the hips as you stick your butt back and lower down (ideally to parallel with ground), raise back up, then press the weights overhead, then lower weights back to the shoulders.

Modify but doing a ¼ squat only lowering half way to parallel.

Lunge with a bicep curl

Start in the athletic stance with weights at your side, Step back to a reverse lunge, perform a bicep curl as your hold the lunge. Step forward back to the staring position. For beginners, modify by starting in the lunge position rather than stepping back for each rep. For a more advanced version, step forward to balance between reps. Repeat on each side. 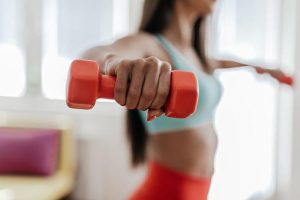 Split squat with a reverse fly

Stand on right leg, with left leg behind about 6 inches as a kickstand, squat down, putting most of weight in right leg, come back to starting position, extend bent arms out to the side. Repeat on each side.

Deadlift with an upright row 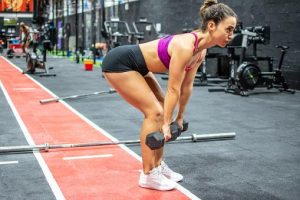 Start in athletic stance with weights in each hand. Lower down, with a flat back, weights to mid shin. Raise back up to starting position, using hamstrings. Bring weights up, through middle of body, to right under chin, elbows out to the side.

Sideways walk with a tricep extension

Place a medium to high-tension circle band around your thighs. Hold one weight in each hand. As you step to the right, extend both arms back behind, elbows glued to sides, then back to start. Step in the other direction, extend arms behind again.

Bridge with a chest press

Lay on your back, knees bent, one weight in each hand. Raise your hips up to bridge, press the weight up over your chest, fists facing each other, then lower them back down. Bring your hips back to the ground. That is one rep.

Use your imagination to come up with additional compound moves. The possibilities are endless. Compound exercises will up your strength game and keep things interesting and challenging.